PET met is a polyester film metallized with aluminum powder. Polyester film (short: PET film) is already characterized by high strength and surface hardness. Especially with regard to the diffusion density however, the favorable properties can be improved through the use of aluminum powder.

A PET film metallized with aluminum powder has advantages and disadvantages compared to conventional aluminum foils. The advantages of PET met are in particular, a higher tensile strength and lower production costs. The possible processing speed is significantly higher than that of aluminum foil in the composite material produced by vaporizing aluminum.

This makes PET met, the metallized polyester film particularly useful for applications such as:

High, but not absolute diffusion density

With PET met, a composite material made of a wafer-thin aluminum layer and a PET film, diffusion values of less than 0.5 cm³/m²/d for oxygen and less than 0.3 g/m²/d for water vapor even at material thicknesses of 10 μm can be achieved. These values ​​are already close to the measurement limits which are indicated for the identification of the absolute diffusion density.

For an absolute diffusion density, however, a classic aluminum foil or a different metal foil has to be used.

In contrast to a laminated composite material, the aluminum coating in PET met only causes a change in the diffusion, optical and electrical properties. The favorable strength values ​​and the low specific weight of the PET film however, remains practically unchanged.

Really just a touch of aluminum 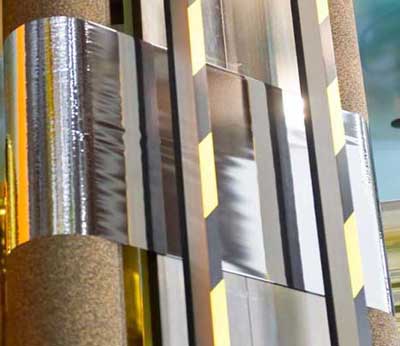 The thickness of the aluminum layer in PET met is so small that the unit, Ångström, which is derived from the atomic diameter is usually used instead of a measurement in μm (micrometers).

A measurement in Ångström can therefore be regarded as a corresponding number of atoms stacked directly above one another. This of course, does not reflect the actual physical conditions, but illustrates the extremely small thickness of the metal support layer.

The typical range of aluminum layer thicknesses for a metallized PET film of about 30 Å – 500 Å is about 3 to 50 nm. For comparison, pure gold can be reshaped into 2000 Å of thin gold leaf. At this thickness, gold is already slightly translucent and appears green against the light.

Even metallized PET film is not completely opaque. In the case of incident light, this effect cannot be seen due to the silvery reflecting surface. This effect can be varied by printing, dyeing or varnishing as well as by brushing or embossing the PET film.

The highly reflective surface of a metallized PET film can be used to create an attractive optical effect in packaging as well as a barrier against electromagnetic radiation.

Aluminum vapor-coated PET foil reflects not only visible and infrared light, but also UV radiation. The aluminum coating differs from the silver or gold coatings used for similar purposes. Compared to these metals, the degree of reflection of aluminum is largely independent of the wavelength. The minimum which is still above 85%, is slightly above 800 nm in the near infrared range.

Effect of film thickness on the reflection factor of PET met 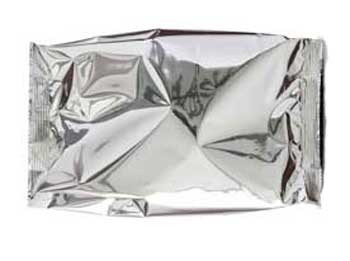 Packaging made of metallized PET

The reflection factor and the optical density of metallized PET film increases proportionally with the thickness of the aluminum coating. The optical density (OD) measured as the logarithm of the incident optical radiation divided by the radiation energy transmitted is typically between 0.25 and 3.5 for PET met.

The thicker the aluminum layer, the higher the optical density and the lower the transparency.

The degree of reflection is thus about 66-99% because, due to the logarithmic scaling, an optical density of 0.3 corresponds to half of the transmitted radiation intensity.

Alteration of properties due to ageing

Just as it is the case with solid pure aluminum, a superficial oxidation takes place in the aluminum coated PET film. It protects the metal from further chemical conversion, both on the side exposed to air as well as the substrate side.

This self-passivation resulting from the formation of transparent aluminum oxide leads to a reduction in the optical density and the electrical conductivity, especially in the first 24 hours after the production of the metallized PET film. It must therefore be taken into account during production if customer specifications are to be observed with regard to these values.

Since the oxide layer grows to a maximum of 3 to 4 nm irrespective of the thickness of the aluminum coating, the effect is particularly strong with thin coatings. With an approximately 10 nm thick aluminum coating, the optical density can drop from 0.2 to 0.28 within 24 hours and to about half of the original value in the long term. 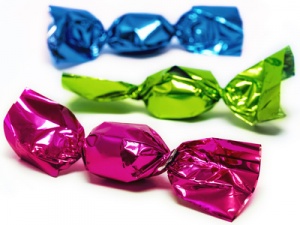 Metallized PET film is suitable, for example, in packaging technology as a direct replacement for aluminum foil. For the same film thickness, PET met is characterized by a higher tensile strength and flexural rigidity such that the composite material produced by vaporization of the metal is not as wrinkled as aluminum foil.

This can give the package a more presentable look. Despite this, individual packages for candies, which are closed by twisting the film ends (twist closure) are also possible with metallized PET film.

Further application possibilities for metallized PET film in the field of food packaging result from the fact that the extremely fine metal coating changes the electrical conductivity at the surface of the film. This makes PET met visible in metal detectors, but can also be used, for example in the packaging of microwave dishes with low water content, so that the food can absorb more energy and heat up quickly.

In the case of building insulation, the positive influence of the aluminum vaporization on the diffusion resistance as well as on the reflection of thermal radiation is important. Compared with aluminum foil, PET met offers no absolute vapor barrier, but a significantly higher mechanical resistance and a better reflectivity.

Do you want to use PET met film?