Aluminum foil is characterized by its alloy and the material state. Pure aluminum (i.e., 100%) does not exist on the market, but other metals and semimetals are bonded to the aluminum in an alloy. These are mainly chromium, copper, iron, magnesium, manganese, silicon, titanium and zinc.

These elements are often only added in fractions of one percent, but can strongly influence the properties of the aluminum. For this reason, different alloys are preferred for different applications.

Alloys are given in various notations. International EN-AW notation (eg EN-AW 1050 with at least 99.5% aluminum or EN-AW 8079) is used internationally. In Germany, sometimes the old DIN notation is used (eg AlMg3 for EN-AW 5754).

The alloys differ only insignificantly in price, but some alloys are produced less frequently than others. Such aluminum alloys are therefore more difficult to obtain, especially when a small quantity is demanded.

Aluminum foils from soft to hard, and degreased 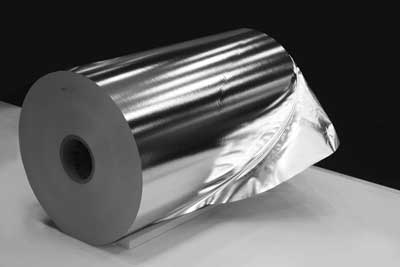 In addition to the alloy, the material temper also has an influence on the properties of the aluminum. A distinction is made here between “soft” and “hard” aluminum, as well as the intermediate forms “quarter hard”, “semi hard” and “three-quarter hard”.

After (several times) rolling operations, the aluminum is in a hard condition. If the rolls are then heated for several hours in an oven, the material is transformed to a soft state. In addition, rolling oil residues also evaporate on the film. This is particularly important for the production of laminates, because oil residue is degrading or preventing the adhesion of the adhesive. For laminates, mainly soft aluminum is used. This also applies to coatings – most of the lacquers also do not adhere to films with oil residues.

If, however, aluminum foil is to be used in the “hard” state for laminates and lacquered films, the films can also be degreased chemically. The aluminum foil is “washed” by a bath in chemical substances instead of heating the foil in the oven.

Composite films made of aluminum with PET, PE, paper and other materials

Multilayer films are referred to as laminates or composite films. These are multilayer films made of different materials, the individual layers being glued together. 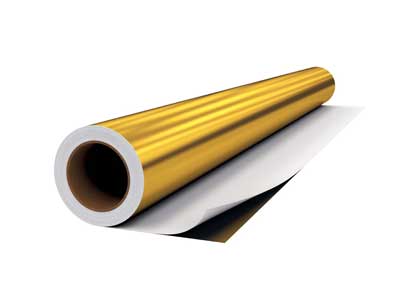 The process of gluing the films is called “laminating” or “lamination“. When a plastic material is applied to a carrier web in liquid form, it can itself serve as an adhesive for a further film. For this purpose, a PE granulate is usually heated and applied between the two foils to be bonded. One then speaks of a “PE-lamination“. When the PE is applied to only one carrier (i.e. outside the finished film), it is referred to as “coating” or “extruding“.

The most important (mechanical) properties for films and tapes are the tensile strength, the yield strength and the elongation. These properties are important both for single-layer foils (ie, for example, pure aluminum foils) and for laminates.

In the case of laminates, adhesion is also important. The bonded adhesion is used to indicate how well the individual layers adhere to each other. Depending on the application, characteristics such as degree of gloss, water permeability and vapor permeability, or the degree of emissivity also play a role.

When purchasing aluminum foil and strips, the thickness and width of the foil should be indicated. For aluminum foils the thickness will be specified in micrometers (μm = 1/1000 millimeters). The unit millimeter (mm) is also used for thicker aluminum strips. The width is generally expressed in millimeters, but also centimeters (cm) or meters (m) are common. 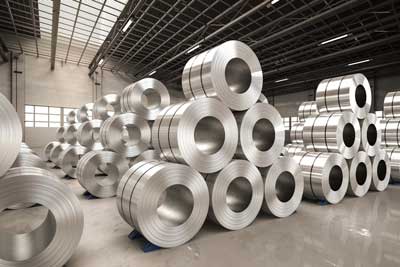 In addition to the thickness and the width, the roll presentation/format is also important. Rolling is defined as the weight, the reel outside diameter (OD) and the lineal meter or length per reel. These are frequently limited by the further processing steps, for example, a further processing machine can only pick up rollers with a certain maximum weight or maximum outer diameter.

Alfipa supplies aluminum both on large mother reels of several hundred kilograms, as well as “small reels” with few running meters. In principle, aluminum foil is more expensive on small reels (i.e. with a few meters and light weight) than aluminum foil on large reels (with many meters and high weight), because the more frequent reels changes during production mean that the production costs are much higher. This applies to both aluminum foil and composite film.

When ordering smaller quantities, aluminum foil is mostly taken from a mother reel and cut to the desired width and length – which means a further step in comparison to the material on the mother reel, which makes the material more expensive.

For formats (also known as aluminum sheets for thicker material), applies the same as for small reels. Formats are generally cut from an aluminum foil or from an aluminum strip, and are therefore more expensive than when the same material is used as a film or tape. In addition, the shipping is often slightly more expensive, especially if it is only a few formats.

We supply aluminum foils and formats in many dimensions.

We are happy to advise you – inquire now!